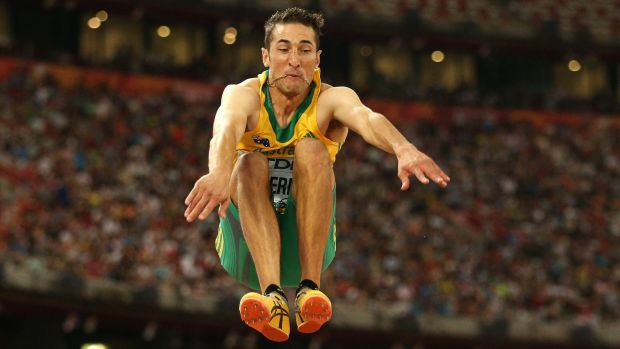 Carrying the torch of Australia’s track and field medal hopes in Rio, Fabrice Lapierre has defiantly declared he is the one to beat for Olympic gold.

The long jump world silver medallist from Beijing last year said he is in the form of his life and believes he can claim gold.

“I don’t know what everyone else thinks but in my opinion I’m not worried about anyone else,” he said.

“I do think I can do it and I’m going in there with that mentality of ‘yeah, I’m going out there to win’. I believe I am going to win.”

In a team without a superstar Lapierre has shouldered the burden of national expectation that has been carried by Sally Pearson in recent Olympics to win gold. He is comfortable with the role.

“It’s a good feeling to know that Australia is looking to me for a medal, I love that and I thrive off it,” he said.

“I have only been to one Olympics but going to major championships is what I love, it’s my favourite thing, especially when I am in great shape and in the right headspace, I really look forward to it

“I’m happy to go out there representing Australia and get that medal that they want.”

A good performance in the last Diamond League meet in Monaco has him confident that despite not winning there his biggest jumps are coming at the right time.

“It’s come along really well, I’m almost basically at the peak right now where I’m performing the best I have in this last month of training … things are looking great I’m excited,” he said.

“I went to Europe last month and I went out there and on my first jump I produced the biggest jump I had done all year.”

The 33-year-old was speaking from Phoenix, the training base of respected coach Dan Pfaff whom Lapierre cites as responsible for the late career turnaround in his fortunes.

After winning gold at the world indoors in 2010, early in his career, Lapierre drifted as an athlete of talent but unfulfilled ability until his move to Pfaff’s base two years ago.

Lapierre wonders what could have been had he made the move sooner, but acknowledges that he might not have had the maturity to embrace the opportunity earlier.

“Last year was in a way a development year, this year was my second year with Dan and he always told me that the second year was going to be a lot better than the first year. I am just so much more confident than I was last year.”