After failing to deliver on the contract he had signed with Russian online gift store Pich Shop, a 21-year-old entrepreneur agreed to be auctioned off to the highest bidder and marry a complete stranger for at least one year, in order to avoid being sued.

A week ago, a strange listing showed up on PichShop.ru – a young man named Aleksandr Kramarenko available for marriage, with a 1 year warranty. The “product” was listed as “in stock” and featured a detailed description – including age, height, weight, zodiac sign and interests – and photos (both dressed and topless). The listing mentioned that Aleksandr was going to be auctioned off to be married to the highest bidder, and invited women no older than 35 to bid for the chance to become his wife for at least one year. The minimum bid was set at 10,000 rubles.

This all sounds a bit too corny to be true, and, to be fair, such pranks are not exactly uncommon around the holidays. Some of them are actually pretty elaborate and end up attracting a lot of media attention, which translates into free publicity for companies, but this particular story seems legit. 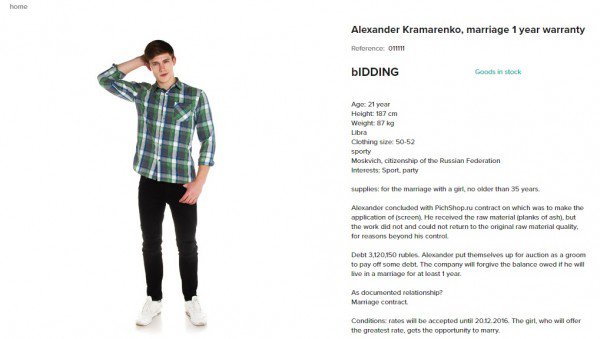 On the “product” page, Pich Shop states that the 21-year-old entrepreneur owes them 3,125,150 Russian rubles ($51,000), after failing to deliver on a contract to screen print 1830 ash floorboards. They sent him the materials for printing, but not only did he not deliver the finished products, but he couldn’t return the materials either, “for reasons that were beyond his control”.

That could be a made up story as well, but a number of Russian news outlets have contacted both the online gift shop and Kramarenko, and both sources confirmed that the story was for real.

“Aleksandr acted as mediator. He took the order and passed it for production to a third party, but his partners deceived him. He owes us,” said Alexander Belousov, a representative of PichShop.ru. The shop was going to sue him for damages, but they offered him this deal as an alternative – he had to agree to be auctioned off and stay married to the winner for at least a year. He apparently agreed.

This way, the shop gets part of the money it’s owed, some free publicity, while Kramarenko gets to walk away from the contract after a year of marriage. 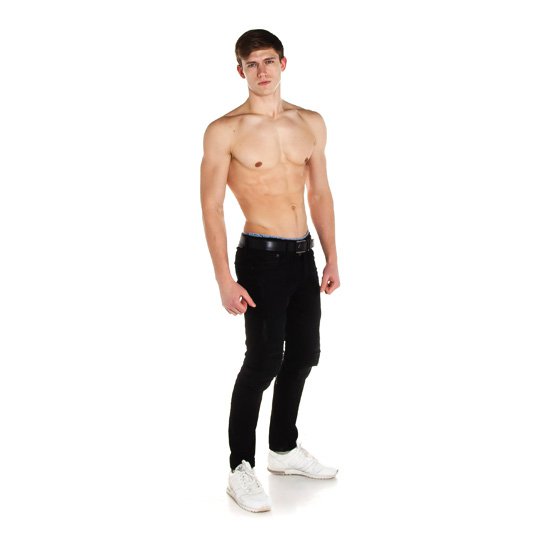 And in case you’re wondering who in their right mind would bid thousands of dollars for the opportunity to marry a stranger, last week, Belousov said that they had already gotten bids of around 300,000 rubles ($5,000) and was expecting even higher ones as the December 20th deadline approached.

On December 21st, Alexander Belousov announced that Pich Shop had received around 200 bids for their unique “product”, a third of which were from men. However, according to the rules, only bids from women of up to 35-years-old were counted, the rest were disqualified. The lucky winner will apparently be announced at the end of this week, but as for the winning bid, the sum is apparently confidential and will not be revealed. 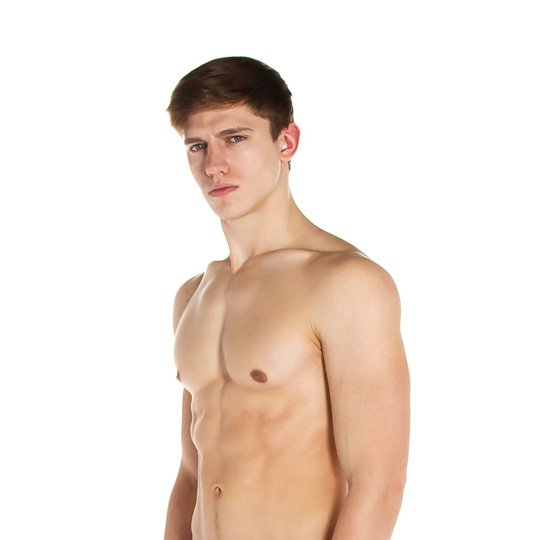 Aleksandr Kramarenko’s wedding date will be set after this week’s announcement. In the meantime, this story has gotten him a lot of exposure, and Belousov claims that he has already received job offers from several modeling agencies.

45 Times Jessica Alba Showed Off More Than She Should Have