A school principal in China’s Henan province was recently suspended for making young students take tests outdoors in smog so thick that they could barely see their papers, despite receiving orders to close the school.

On December 20th, 480 students from the No. 1 Middle School in Linqi town, Linzhou, were forced to take their tests on the school’s an outdoor football field, in heavy smog. Photos taken by concerned parents and later sent to local media outlets show the children struggling to make out the writing on their papers, but the principal apparently decided that the smog was not “severe”.

Unfortunately for principal Feng Jisheng, the photos caused quite an uproar on Chinese social media, prompting his immediate suspension by the education commission for Anyang prefecture. It turns out that he had ignored a notification from the local board of education about canceling classes, because the tests had been pre-arranged. When confronted by reporters, he admitted that the weather was “hazy” at the time of the tests, but argued that the smog was not “severe”.

However, it’s not just the photos that contradict Jisheng, but also the official Air Quality Index, which on that day reached above 500, a “red” level at which authorities recommend not leaving the house unless you absolutely have to. He apparently thought that making young children take tests that lasted at least 4 hours in these conditions was a necessity.

Other teachers in smok-stricken northern China had a lot more sense than this guy, live-streaming lessons from an empty classroom to students watching from their own homes. This way, they didn’t fall behind, while ensuring the children’s safety. 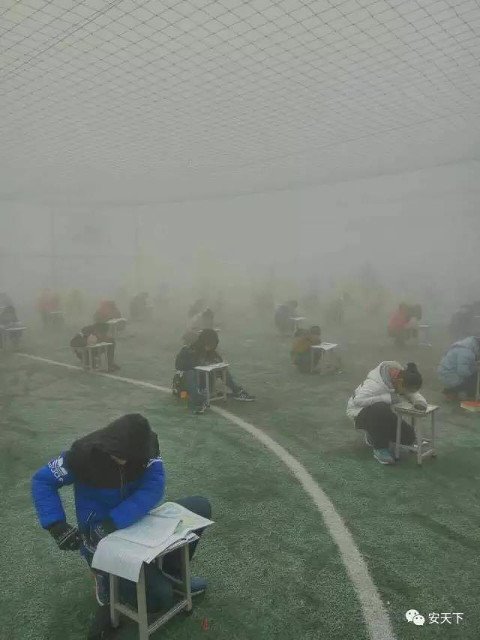 Shanghaiist reports that despite the backlash on social media, and his temporary suspension, Feng Jisheng is unlikely to lose his job over the incident. So if you thought your school was bad, think again!

Reflections That Will Mess With Your Head

Man punches a kangaroo in the face to rescue his dog

WTF? Crazy Dude Purposely Gets Himself Stung By A Wasp That Can Allegedly Kill A Cow

World’s 10 BIGGEST ANIMALS Of All Time