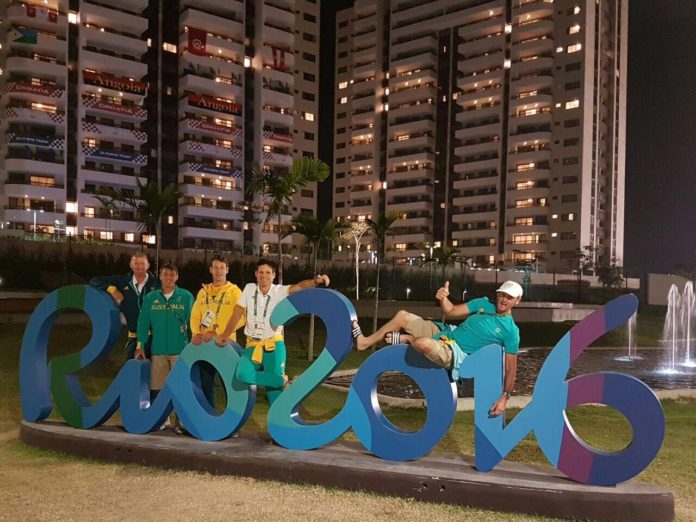 EQUESTRIAN: Eventing rider Sam Griffiths is about to embark upon his second Olympic Games and after a smoother preparation to that which he experienced ahead of the 2012 London Olympic Games, the 44-year-old has high hopes for himself and his team in Rio.

At London, Griffiths was called in to the team to replace Megan Jones the day the competition began. It was the team’s second substitution in a week after Shane Rose was replaced by Jones with both riders’ horses experiencing minor injuries on the eve of competition.

This time around Griffiths been part of the team since the beginning.

“The difference here is that I’m feeling readier and hopefully I can show that in my results,” Griffiths said.

“In London I came into the team as a last minute reserve, literally the day of the competition.

“This time I was named in the team so I’ve had a really good program and I’ve been able to focus on fine-tuning everything.”

The Aussie Eventing horses arrived into Rio on Saturday on a special chartered flight that carried 34 horses from 10 nations. It was the first time that Griffiths’ horse Paulank Brockagh had been on a plane.

“She’s really proud to get that (passport) stamp,” he said. “She’s done a lot of travelling so she’s experienced, but this was the first time that she’s flown, and she’s travelled really well.

“Our team vets take enormous care of our horses and make sure their well-being is right at the forefront.

“We gave her some easy days when we arrived so she could get over the travel. I schooled her today and she felt great so I’m really pleased with how she’s travelled.

“My horse is a really solid competitor and she’s got a great record so there’s not too much to change, it’s just a matter of fine tuning and best preparing to get everything right on the day.

“We’ve had some great sessions so I’m feeling really confident.”

The team is united in its pursuit for gold and a recent win over gold medal favourites Germany has boosted morale in the Aussie stables.

After finishing sixth in the team’s event in London, Griffiths says the Aussies have high expectations for Rio and he’s confident the group which has been assembled can return Australia to the podium.

“We know there are some other good teams out there, particular the Germans who are going in as favourites, but we beat them on their home ground in Aachen the last time we went head-to-head, so there’s no reason why we can’t do that again.

“Individually I’m feeling pretty confident so I’d love to get an individual medal, it’s going to be really stiff competition so it won’t be easy. EQUESTRIAN Even just from our team-mates – any of the guys in our team could win an individual medal. I know all the other nations have some super riders but I want to be right up there.”

Eventing competition begins at the Olympic Equestrian Centre in Deodoro on August 6.