NutsFeed
HomeNewsScienceGoogle Home vs. Amazon Echo: Which Robot Do You Let Into Your...
Science

Google Home vs. Amazon Echo: Which Robot Do You Let Into Your Life?

Choosing a smart speaker comes down to how you plan to use it, and which company you trust more

The $130 Google Home and the $180 Amazon Echo are speakers with built-in AI voice assistants. In an interview with WSJ’s Joanna Stern, Amazon’s Alexa and Google’s Assistant discuss their strengths and weaknesses.

When the robots turn against us, I’ll likely regret saying this but… you should make a talking speaker part of your family.

The only question is, which one do you adopt? Amazon’s Echo or the new Google Home?

Ever since Amazon released the $180 Echo Wi-Fi connected speaker, Alexa, the friendly built-in voice-assistant, has become a mega hit. Always-on microphones combined with clear, snappy responses have made talking to a computer as normal as clicking a mouse.

Among my friend’s son’s first words? “Ayex-yah.” When I unplugged the Echo last week in the kitchen, my wife wondered how we’d ever know when to take the chicken out of the oven.

Luckily for our dinner, the $130 Google Home I replaced it with does a lot of the same stuff, with a similar female voice. Living inside the air freshener-looking device is the Google Assistant. It’s quick, smart, funny—though it’s got a way to go to catch Alexa on some basics, and third-party apps, aka “skills.”

Google Home Assistant, right, is about the size of a tabletop air freshener.

With the trove of info Google has on us from years of searches, emails, map directions—even chats—it’s surprising the Assistant isn’t more useful. Of all the tech companies, Google seems as if it would be the one to create the intelligent companion we’ve seen in sci-fi movies. In the here and now, however, choose your new robot best friend based on what you’ll use it for most—and which company you trust to have microphones in your house.

Best Know-It-All: Google Home
When Home and Echo took the stage for my new Talking Speaker Quiz Show, Google pulled out ahead but not by much. Both knew the 25th president (McKinley), the capital of Zimbabwe (Harare), the year “Pretty Woman” hit theaters (1990). They got the basics, too: setting a timer, the weather forecast, the current time, the next Giants game.

The Google Assistant surpassed Alexa on the more random questions (What’s the average age of a monkey?) and with the ability to cite specifics about my schedule and travel plans.

Still, if Google can build cars that drive themselves, why can’t this thing set a simple reminder? Or send an email? Why doesn’t it work with multiple Google accounts? Why can’t it call my mom? Google says Home will get more features over time.

Best DJ: Tie
Right now, the best thing about these speakers is music control. They’re like your very own Casey Kasem. “OK, Google, play some sad love songs.” (“What have I got to do to make you love me?” croons Elton John.) “Alexa, play today’s top hits.” (Some Maroon 5 jam.) “OK, Google, play some Springsteen.” (It picks “Dancing in the Dark.”)

The Amazon Echo, left, and Google Home, right, have indicator lights to notify you they are listening and connected to the Internet.

Google also has multiroom controls. “OK, Google, play ‘Beyoncé’ everywhere,” and Queen Bey fills the rooms where you have Home speakers. It also can control a Chromecast connected to a TV or speakers. Amazon doesn’t yet have a similar feature, though its $50 Dot allows you to bring Alexa to any Bluetooth speaker or hi-fi system.

The decision would be easier if I didn’t prefer the fuller sound quality of the Echo. I also prefer the Echo’s blue light that indicates Alexa is listening. Google’s colorful LEDs are hard to see from afar. 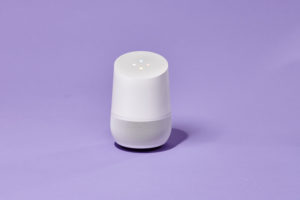 Best Personal Bot: Amazon Echo
What makes computers and smartphones personal are different apps and services. My iPhone likely doesn’t have the same games, cooking and fitness apps as yours. Since Google hasn’t yet opened up Home to third parties, the Echo is the best personal robot.

In the “Skills” section of Amazon’s Alexa app for iPhone and Android, you choose what you want. With the Twitter skill, Alexa can read my feed. Alexa gives me “Flash Briefings” from The Wall Street Journal and NPR. With The Dishwasher skill, I tell Alexa if dishes are clean or dirty so the next person who comes along can ask.

The Google Assistant can currently call you an Uber and… that’s about it. Soon Google plans to add OpenTable and Netflix, and open up the platform to other software developers.

Best Butler: Amazon Echo
These speakers are the best smart-home gadgets you can buy, but they’re also the best remote control for connected lightbulbs, thermostats, outlets and a growing list of appliances.

I could use either speaker, paired with Philips Hue, to control lighting with my voice. In my case, a command to “turn off the lights in the kitchen” killed the overheads—and the speaker doesn’t have to be near the lights for this to work.

Amazon’s early lead shows here too. Alexa has skills for most of the leading smart-home platforms and can control a variety of products. For now, Google only works with the Nest thermostat, Philips Hue lightbulbs and Samsung’s SmartThings platform. That said, Google’s app for configuring everything is much easier to use than Amazon’s.

Best Privacy Protector: To Be Determined
These speakers are a ton of fun, but putting an always-listening microphone in your house is inherently creepy—doubly so when it’s connected to the servers of two mega corporations that record every command. 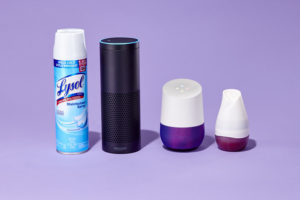 The microphones are always listening but record and connect to the company’s servers only when they hear trigger prompts—the extremely awkward “OK Google” and the more graceful “Alexa,” respectively. The sound bite is immediately sent to the cloud.

Both Amazon and Google keep a log of every request, with your voice recording attached. They are encrypted and stored on the company’s respective servers, though you can opt to delete. (You can use the speakers’ smartphone apps, but Google also gives you control via its My Activity webpage.) Both speakers also have physical microphone mute buttons. When it comes to the threat of hacking, Google says it employs advanced security techniques to protect Home’s system software and encrypt all communication to and from the device. Amazon says it uses encryption to protect sensitive communication.

Google is an advertising company, and collects your Assistant queries like any other web search. While there are currently no audio ads on the Home itself, that could change. Amazon just wants you to spend money. (”Alexa, buy me some more paper towels.”) Amazon says nonshopping queries to Alexa aren’t used to target product ads.

There’s a theme this fall: Choosing a gadget is less and less about specs, and more about how it works with the other devices and services in your life—and how well it safeguards your personal data.

Scientists attempt to measure what makes a voice unique

Internet users is making a networking by channels

45 Times Jessica Alba Showed Off More Than She Should Have