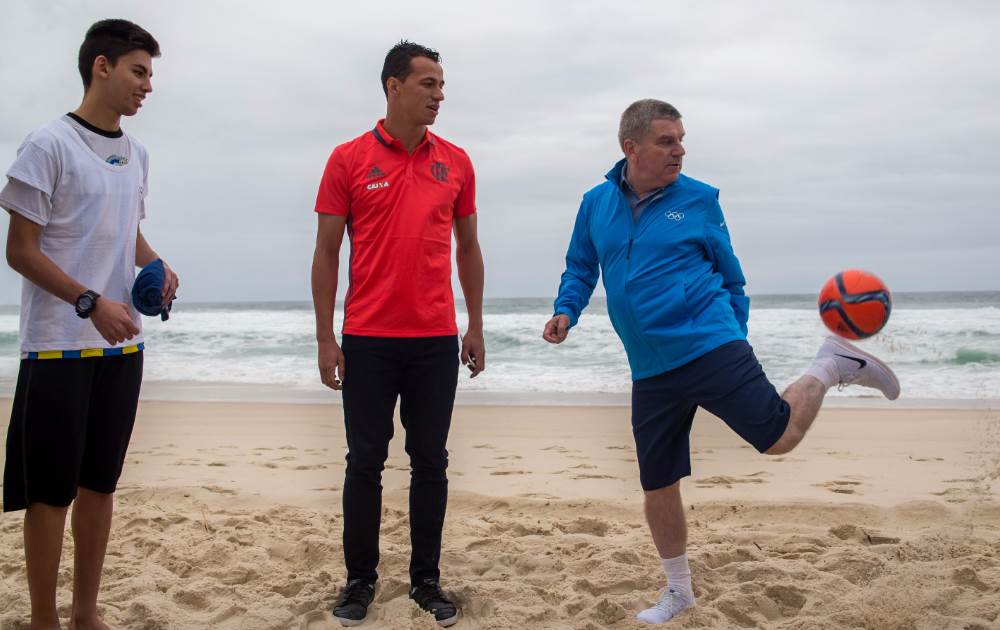 Cloudy weather and a brisk wind could not stop Thomas Bach from enjoying himself as he took to Barra da Tijuca beach for a quick kickaround on Thursday (28 July) afternoon. The president of the International Olympic Committee (IOC) looked delighted as he took turns juggling the ball with a group of local teenagers from a social project named Beach Generation Sport Centre (Centro Esportivo de Praia Geração).

Totally unfazed, both by the crowd watching him and the ball at his feet, Bach used his feet, knees and head to keep the ball in the air, impressing onlookers.

“I’ve always been a football fan,” he said. “I played when I was young, but my parents put me in fencing. Even today I don’t know why, but I never stopped enjoying myself when I play.”

Bach went on to win fencing gold in the team foil event at the Montreal 1976 Olympic Games, but on Thursday he seemed to be living out a dream, playing beach football in Brazil while wearing the famous yellow national team shirt with his name on it. “I’m proud to wear it. The other day, I told Pelé that the 1970 team was the greatest of all time.”

Pelé plays host to Olympic flame at his museum in Santos

Other Olympians took part in the event on Thursday: 1994 World Cup winner Jorginho, now the coach of Rio club Vasco da Gama; Flamengo forward Leandro Damião, who top scored at the London 2012 Games; volleyball player Marcelinho and former beach volleyball star Jorginho. Damião, who presented Bach with a Flamengo shirt bearing the number 16, a reference to the year of the Rio Games, also took part in the kickaround.

“It was a good laugh, worth it for the Olympic spirit and for all he has done for sport. He even kicks the ball well,” Damião said, laughing.

Even without the ball at his feet, Bach displayed calm and optimism with regards to the prospects for the Rio 2016 Games. The president said that the final adjustments being made at the Olympic Village are a normal part of the organisation of the Games.

“I don’t have any concerns. No host city has been totally prepared one week out. We’ve seen the progress being made and how the city is already getting into the atmosphere. I feel at home, and this happiness will make the Rio Games unforgettable”, he said.

Bach is seeing first hand how the Olympic Village is filling up with athletes: he checked into the 3,604 apartment-complex on Thursday morning before having lunch with a group of athletes. Bach intends to sleep at the village as often as possible, and is staying in the same block as the Olympic Refugee Team.