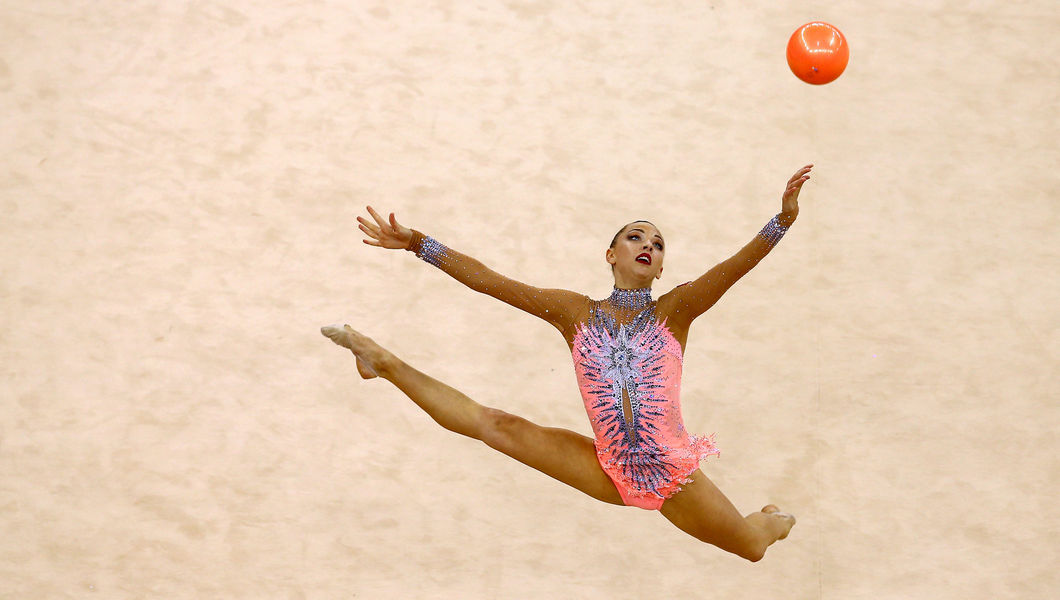 BELARUSIAN RHYTHMIC GYMNAST MELITINA STANIOUTA TOOK TIME OUT FROM HER PREPARATIONS FOR RIO TO TELL US ABOUT THE MAGIC OF HER SPORT.

“Rhythmic gymnastics is a cocktail of sport and art,” says Staniouta, who emerged victorious from the Rio 2016 test event in April.

“We have four pieces of apparatus: the hoop, ball, clubs and ribbon,” she continued. “Some people say rhythmic is just dancing with your hoop. We dance but it’s the most difficult dance ever. You have to be an actress. I have to do elements: throws, catches, pivots and jumps. So you have to do a lot during your routine, just 90 seconds to tell a story without words, and to win a medal.”

Staniouta trains nine hours a day, five days a week, and does extra training on Saturdays, rehearsing her routines over and over again.

It is, as she explains, a process that requires painstaking attention to detail. “With the hoop I have so many difficult catches, and I think people like it more than my other routines because it’s very difficult. I have to catch it with my legs, with my neck.

“The ball is very elegant,” she adds. “I feel like a true lady, very feminine. With the clubs I’ve just changed my music. I’m a bit nervous about doing my routines because I don’t know what people will say or the judges will say. I hope they will like it. I think ribbon is the most difficult one because it’s the only routine which depends on the arena. There are many conditions. It’s light and to know it you have to have many skills and the coordination to catch it. But you have to catch it.”

A sport for female participants only, rhythmic gymnastics first appeared on the Olympic programme at Los Angeles 1984, with Canada’s Lori Fung securing a historic victory in the individual competition.

The team competition was added at Atlanta 1996, where Spain secured a historic victory. Russia’s gymnasts have dominated the sport since then, winning the next four team golds and also securing four individual golds in a row, courtesy of Yulia Barsukova in 2000, Alina Kabaeva in 2004 and Yevgeniya Kanayeva in 2008 and 2012.

Born in Minsk on 15 November 1993, Staniouta, who speaks a number of languages, took up gymnastics at the age of five. Subsequently turning her attentions to rhythmics, she made the Belarus junior team in 2005 and earned a number of top-three finishes in international junior competitions.

She made her Olympic debut at the age of 18 at London 2012, where she missed out on a place in the individual finals after finishing 12th in the qualifiers, and was not on the Belarus team that took bronze behind Russia and Italy.

The Belarusian has made great strides since that maiden Olympic experience. In addition to impressive showings on the world championship stage, she won World Games gold in the ball and clubs in Cali in 2013, European Games silver in the hoop in Baku in 2015, a year in which she also took gold in the ribbon at the Summer Universiade in Gwangju. In the meantime, she has also pocketed five European championship silver and bronze medals apiece.

She has continued her fine form in the lead-up to Rio, taking the honours in the Rio 2016 test event at the Olympic Arena in April, which doubled up as the final gymnastics qualifier for the Games. Reacting to that win, a delighted Staniouta said: “When you have an enthusiastic crowd, it makes you stronger. It’s great. At the end of the day, we don’t perform for the judges but for the fans.”

She followed up by winning all-around gold at the Bucharest Grand in May, and then excelled herself in the World Cup meeting in Minsk, collecting all-around bronze.

“Firstly, I have to beat myself, my nerves, and then the Russian, the Ukrainian and Korean gymnasts,” she continued, assessing her prospects in Rio. “What I have to do there is do my best and a little bit more. And then I’ll be happy.” Time will tell if the Belarusian can achieve just that.