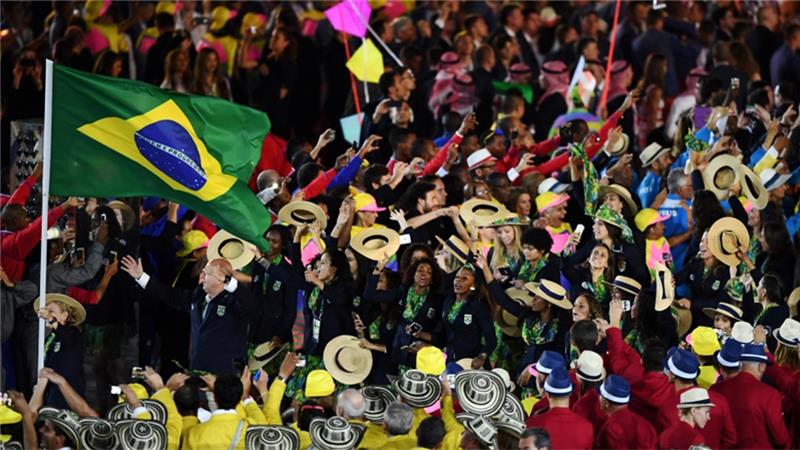 The 2016 Olympics in Rio de Janeiro have officially opened with a flamboyant ceremony celebrating Brazil’s history and cultural diversity, all to the pulsating beat of samba, bossa nova and funk.

Marathon runner Vanderlei Cordeiro, who was denied victory at the 2004 Athens Games when he was attacked by a spectator, lit the cauldron on Friday after an exuberant show of Brazilian cultural touchstones and breathtaking fireworks.

“Our admiration for you is even greater because you managed this at a very difficult time in Brazilian history,” Thomas Bach, the president of the International Olympic Committee, told the country during the ceremony at the famed Maracana stadium.

“We have always believed in you.”

The Games, the first ever to be held in South America, were declared open by Michel Temer, Brazil’s interim president. But in a reminder of the country’s challenging political and economic situation, Temer was met with loud booing by some in the crowd, which was swiftly drowned out by music.

Temer took over when impeachment proceedings started against President Dilma Rousseff, whose supporters accuse him of plotting against the suspended leader.

Brazil is also in the middle of a deep recession and has had to keep spending on its Olympics in check. The four-hour opening ceremony’s tight budget was reportedly about half of the $42m extravaganza in London four years earlier.

Despite the resentful undercurrent, and protests against the Games just hours earlier, spirits were high among the thousands of athletes, performers, fans and officials at the 78,000-capacity Maracana.

The creative minds behind the opening ceremony were determined to put on a simple show that would not offend a country in dire economic straits, but would showcase the famously upbeat nature of Brazilians.

The Rio show dazzled with light effects, colourful costumes, singing, dancing, drumming and fireworks as the audience was taken on a journey through Brazil’s history and its diversity.

“This opening ceremony had very much a Brazilian feel to it by design, this being such a historic Olympics, the first time ever held in South America,” Al Jazeera’s Gabriel Elizondo, reporting from Rio de Janeiro, said.

“Whether it was the music, or the colours, or the atmosphere, it had very much a feel of Rio de Janeiro and of Brazil.”

The low-tech show started with the beginning of life itself in Brazil, and the population that formed in the vast forests and built their communal huts, the ocas.

The Portuguese bobbed to shore in boats, the African slaves rolled in on wheels and together they plowed through the forests and planted the seeds of modern Brazil.

“They’re talking about slavery? Wow,” Bryan Hossy, a black Brazilian who watched the ceremony in a bar in Copacabana, told the Reuters news agency. “They have to talk about that. It’s our story.”

The show then took a more serious turn, focusing on the need for environmental protection, in a country that has struggled with the deforestation of the Amazon rainforest. Videos showed the climate change-engendered flooding that could affect cities like Rio.

The ecological theme also flowed into the parade of athletes that followed in the stadium, with representatives of the 207 teams competing in Rio symbolically planting tree seeds that will be later used to create an athletes’ forest in the city.

Each flagbearer was also accompanied by a child holding a plant, while the Olympic rings were displayed in green vegetation.

Al Jazeera’s Elizondo said one of the biggest cheers in the entire opening ceremony was when the 10 athletes making up the first refugee team to compete at the Gamestook to the stadium.

“More than 70,000 people that were in the Marakana stadium and more than two dozen world leaders cheered all of the athletes, but there was really a touching moment when people took to their feet cheering on this refugee team competing for the first time in the Olympics.”