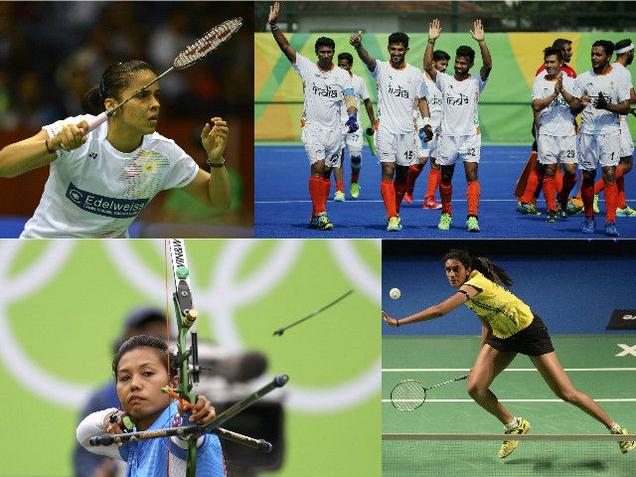 India players will once again take field on day six of the Rio 2016 Olympics with their hunt for the first medal at these Games continue. Badminton’s first matches will be played on Thursday and all Indian player will be in action for badminton. The biggest attraction will be Saina Nehwal who will be in action. Also, India’s other women’s singles player PV Sindhu will be action.

In hockey, both teams of India – men’s and women’s – will take field. The men’s team will be up against mighty Netherlands will women’s team will play USA. In boxing, Shiva Thapa will play his first match.

Golf will also begin on Thursday with three Indians competing in it.

Badminton (Men) Doubles; Singles
17:30 Hrs & 05:35 hrs
Srikanth Kidambi will be India’s big hope in the singles. It’s the doubles pairing of Manu Attri and Sumeeth Reddy who kick off proceedings.

Badminton (Women) Doubles; Singles
16:30 hrs; 18:40 HRS & 19:50 HRS
It starts with the doubles pairing of Jwala Gutta and Ashwini Ponnappa in action. Then it’s over to those two, Saina and Sindhu.

Golf (Men) Individual Event
16:00 hrs
Golf returns to the Olympics after a 112-year hiatus. And both Anirban Lahiri and SSP Chawrasia will fancy their chances in the depleted field.

Field Hockey (men) India vs Netherlands
18:30 Hrs
After beating Argentina, the Indian men are guaranteed a quarterfinal spot. A win against the mighty Dutch will take them to the second position.

Boxing Bantamweight (56 kg)
20:00 hrs
Shiva Thapa will be in action when he takes on Robeisy Ramirez Carrazana of Cuba.