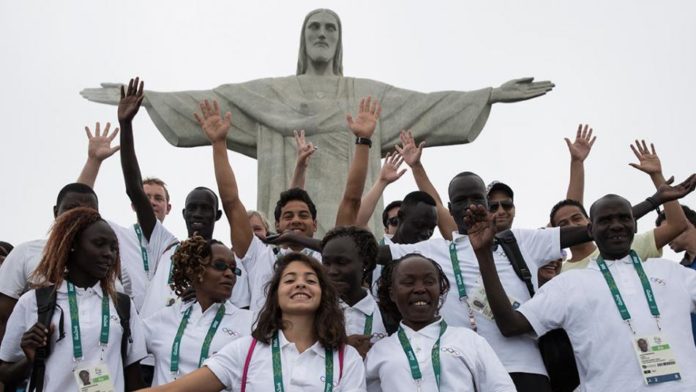 The story of the Refugee Olympic Team is one reflective of the Olympic Spirit – unity and peace.

It’s the first time a team of this nature has been put together to compete at the Olympic Games.

All 10 team members have been identified as stateless; a term that previously has excluded them from competing.

At their first press conference together, the team of 10 represents refugees around the world and sends a message of hope.

There are 10 athletes in the Refugee Olympic Team including two swimmers from Syria, a duo of judokas from Congo, an Ethiopian marathon runner and five long-distance runners from South Sudan.

They all have stories to tell. Stories of overcoming more than just adversity; of the unthinkable. You can’t begin to imagine the horror.

When asked how she is feeling, the articulate 18 year-old said she feels honoured to be in Rio.

“I feel proud; happy. There’s a pang in my stomach, it’s a great feeling,” Mardini said.

Mardini was lucky not to lose any family during the war but says she lost friends in the turmoil.

She says she left Damascus because there was no future there. It turns out she had to swim to save her life.

“I swam for my life when the boat I was in sank,” Mardini explained.

“A lot of things happened. It was really hard. But life will not stop for you. At some point you have to move on. You have to remember the good memories. A lot of people have hope in us. Those fans are motivating.

“I am proud to represent the millions of refugees.

“I miss Damascus. I’m gonna go back one day. I want them not to give up. I want everyone to think of their dreams because a lot of people there have forgotten their dreams.”

It appears swimming may have saved her life not just once, but twice, giving her a new positive focus.

Sitting next to Mardini is fellow swimmer Rami Anis. He too lost friends in the war.

“I prefer your questions be about the future and not the dark past,” Anis demanded.

These athletes have been through such struggle yet are determined to focus on a new battle.

“This is a dream for any athlete,” Anis went on.

“As I child I would dream about participating in the Olympics. I hope by Tokyo 2020, there are no refugees.”

Anjelina Lohalith is a runner from South Sudan.

She said she’d like to be able to continue helping women.

“This is a great chance for me. I would like to continue helping the ladies like I have been helped,” Lohalith said.

Popole Misenga will compete in judo. He lost so much when he fled Congo.

“I lost my mother,” Misenga explained.

“I became a child without parents; without a family. I was separated from my brother.”

He now resides in Brazil.

Yolande Makiba is also from Congo. Her braided bleached hair highlights her vibrancy for life.

“I’ve changed my hair because to build a new life; a new story, I have to change everything including the colour of my hair,” Makiba said.

When asked what she’ll be thinking as she walks into Maracanã Stadium on Friday night, she is eloquent.

“First of all I think about my family,” Makiba said.

“I’m participating in this competition for us to be together. I have to compete for history; for the history of refugees, the Refugee Team, for all of us. When I’m here I represent all of the Congolese people all over the world.

“I want to show the world that we are capable of performing as well as everyone.

“The Olympic Games gives me hope.”

“We have lived through sorrow and now we are experiencing utter joy,” Biel said.

“We can call ourselves ambassadors. I hope it is the way for young people.”

The Refugee Olympic Team will proudly march behind the white Olympic flag during the Opening Ceremony marking the beginning of the Games at 8pm on Friday August 5 (9am Saturday August 6 AEST).