Thailand’s navy on Friday showed off new technology to monitor fishing boats in a renewed effort to crack down on illegal fishing, forced labor and corruption in the seafood industry.

New equipment the navy has been testing includes a GPS tracking system to monitor fishing vessels, a central database and a scanner for officials to check documents.

The system, demonstrated to reporters, won’t fully be in place until April, but outside groups are already skeptical it will achieve what it’s set out to do unless more human enforcement is put into place.

Thailand has been under pressure from the European Union after revelations that it relied heavily on forced labor, and is facing a potential total EU ban on seafood imports unless it reforms its fishing industry.

“We’re doing this to increase the effectiveness of inspection, because putting humans in the loop has caused some errors in the past,” said Cdr. Piyanan Kaewmanee, head of a Thai navy group that oversees illegal fishing, who pointed to corrupt officials as a major issue. “We can ensure that our workers are accounted for, and aren’t lost at sea or transferred from ship to ship.”

New on Friday was a handheld scanner that can read crew identification and other papers to make sure workers are documented and the fishing gear is licensed. During the inspection demonstration, workers crouched and huddled together, holding up green identification cards, as Thai navy sailors boarded their ship, looked through documents, and patted down workers. 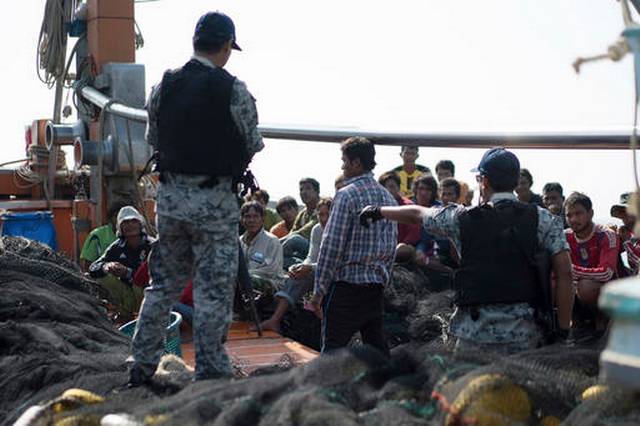 The scanners will be integrated into a vessel monitoring system which will keep track of the location of all Thai fishing vessels using GPS technology and a central database.

The monitoring improvements follow international pressure after an Associated Press report last year revealed that Thai boats were using slaves from countries including Myanmar, Cambodia, and Laos to catch fish, putting a spotlight on illegal practices in the industry including unregistered boats and unsustainable fishing.

In April 2015, the European Union gave Thailand a “yellow card” on its fishing exports, warning the country that it could face a total ban if it didn’t clean up its act — prompting Thai Prime Minister Prayuth Chan-ocha to exercise executive powers to create a Command Center for Combating Illegal Fishing soon after.

Independent observers cautiously welcomed the new equipment, but said Thailand must go beyond technology to ensure its seafood is caught without forced labor.

“To put more muscle into enforcement of Thai labor law, you’ve got to engage directly with workers,” said Jason Judd, senior technical officer at the International Labor Organization office in Bangkok. “Technology can help us to develop that, but really it’s not a substitute for what’s needed most, which is a face-to-face interaction between those who are responsible for enforcing the law — the Thai government — and the fishermen.”

Thailand recently lifted a ban on hiring foreign nationals for its inspection crews, paving the way for Cambodian and Myanmar translators to interpret between Thai police and migrant fishing workers. But the translators will only interview workers if a vessel is explicitly flagged for abuse or wrongdoing, Thai navy officials said.

EU officials will visit Thailand next month to see what progress the government has made, following up on a visit in January this year.

Amazing Images: The Best Science Photos of the Week

Will Artificial Intelligence Be the Next Einstein?

The Universe Is Flat — Now What?

Why Fingernails on a Chalkboard Sound Gives You the Shivers